This year's Street Parade will take place in Zurich on 13 August.

The 29th Street Parade will take place from 1 pm until midnight. Around 80 large and small parties will take place throughout the city and agglomeration of Zurich until the early hours of the morning.

The 2.4-kilometre Street Parade route is the same as in previous years. The parade of Love Mobiles will start at Utoquai in Zurich's Seefeld district. Afterwards, the trucks will roll around Zurich's lake basin via Bellevue, Quaibrücke and Bürkliplatz to the Enge harbour dam.

We recommend travelling by public transport. There are no parking spaces in the inner city, long traffic jams are inevitable. Every year hundreds are still stuck in the traffic jams while the parade is already raging in the city. 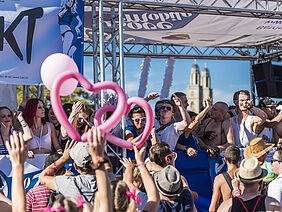 Back
Please share your comments and experiences with us.
Send us an e-mail or call us. We are looking forward to hear from you – soon and often!